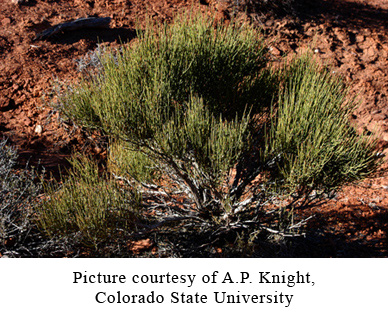 The herb Ephedra, known in Chinese medicine as Ma Huang, comes from the plant species Ephedra sinica and Ephedra equisetina. The active ingredients in herbal Ephedra are bronchodilating alkaloids, including ephedrine, pseudoephedrine, norephedrine, and norpseudoephedrine. Bronchodilation means the opening up of the major airways in the lungs. North and Central American species of Ephedra do not contain these substances.

Ephedra has been used for thousands of years in Traditional Chinese Medicine as part of the herbal therapy for the treatment of asthma, bronchitis, respiratory problems, respiratory infections, and sinus disorders. Until recently Ephedra was a common ingredient of weight loss products however these products have been withdrawn from sale because Ephedra has developed a bad reputation for its abuse as an appetite suppressant.

Why recommend to administration of Ephedra to my pet?

Ephedra finds use in the treatment of chronic respiratory problems, such as bronchitis, sinusitis, and most notably asthma. Ephedra is also an important constituent of some commonly used traditional Chinese herbal formulas to treat low back and joint pain.

How much experience is there with the use of Ephedra in pets?

Ephedra has been used with complete safety for many years as a component of Traditional Chinese Herbal Formulas for the treatment of pets with respiratory disease and lameness. This long track record of safety stems in part from Ephedra never being used alone, but always with herbs that either reduce its side effects or synergistically enhance its action, such that only a small amount of Ephedra is needed.

What species of animals are being treated regularly with Ephedra ?

Mainly dogs and cats are treated with this herb.

How much research has been conducted on this supplement?

Widespread clinical research confirms the effectiveness of Ephedra in people. Not surprisingly, it appears to act in a similar way in small animals.

How can my pet benefit from Ephedra?

By relieving congestion (decongestant) and dilating airways (bronchodilator,) the herb is often used to help pets with respiratory conditions. It is often used in formulas to treat lameness and back pain in weak animals, although the chemical basis for an effect in these patients is not known.

How successful is Ephedra?

This depends upon the severity of the disease but in general pets responding to conventional drugs used to reduce congestion and dilate the airways would be expected to respond to Ephedra. 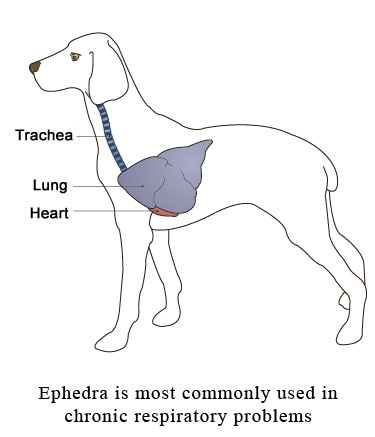 How safe is Ephedra?

When used properly under medical supervision, Ephedra is relatively safe but has the potential for side effects. Common side effects include elevated blood pressure, elevated heart rate, restlessness, insomnia, and anxiety.  In people, deaths have been associated with the misuse of dietary and bodybuilding supplements containing Ephedra. However, according to Chinese tradition, this constitutes an inappropriate use of Ephedra.

Some vets prefer not to use Ephedra due to the potential for side effects. Since it has similar actions to many drugs (ephedrine, pseudoephedrine, aminophylline, theophylline) Ephedra should not be used in combination with these medications. It should not be used in pets with any of the following disorders: anxiety and restlessness, high blood pressure, glaucoma, impaired circulation of the brain, pheochromocytoma, and hyperthyroidism.

The risk of adverse side effects from Ephedra seems exceptionally low, when it is included as a small component of an appropriately prescribed Chinese herbal formula.

Formulas containing ephedra are drug detectable and should not be used in competitive sports.

Where do I obtain Ephedra and do I need a prescription?

If you would like to discuss the use of Ephedra in the treatment of your pet, please talk to one of the vets. We would be happy to advise. A prescription is not required, but it is unwise to use this product without talking to a qualified practitioner.

© Copyright 2015 LifeLearn Inc. Used and/or modified with permission under license.